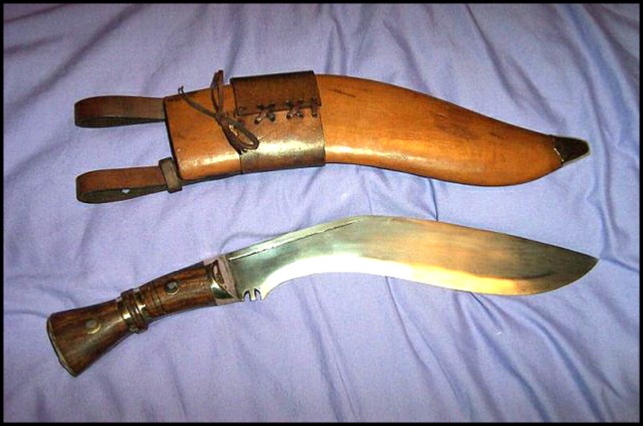 Maharaja of Jodphur (Maharaja Sumer Sing, who ruled Jodphur from 1911 to 1918) choosed this kukri to be official sidearm for his police troops

as well for the troops he raised to support Britain in WW1.

Aluminum handle, blued blade. Kukri comes out from back of the scabbard.

Another Jodhpur. No scabbard, no blueing left on blade.

(i) Same Khukrees are available in our reserve store of museum and if you want a picture of it, can be sent.

(ii) In IInd World War these Khukrees were given to each soldier of Jodhpur Lancer and troops by Maharaja Umaid Singhji of Jodhpur.

(iii) The Khukree bearings the insignia of Jodhpur State, though associated as personal weapon of Gurkhas (Nepalis), was very popular and a useful tool with the troops of the Jodhpur Lancer as well as Jodhpur Sardar Infantry.

(iv) The style and design of the Khukree is true copy of the khukree used in Nepal. This weapon is a special identity of Gorkhas of Nepal.

The Maharaja of Jodhpur must have liked this handy tool for the personal security of the soldiers and issued them.

(a) Jodhpur must be the place where these Khukrees were manufactured because this place is famous for iron skill and making of knifes of all sizes.

(b) Nagaur city, which is on the way of Bikaner only 150 KM far from Jodhpur in North direction. Nagour city is also one of the well-known city for making such weapons and still iron tools are made there and supplied all over country.

(vi) Metal used in hilt is known as “White Metal”, which is mixture of few metals like Aluminum, German silver etc, this is only my perception.

(vii) A book, which has been titled as “History of the 15th Imperial Service Cavalry Brigade 1914 to 1918”. This book is very useful, but I am not finding it in our research centre.

Please find out at your level, if someone has it in his personal library.