After importing thousands of AK-47 rifles from many countries, Saddam Hussein ordered the Iraqi Ministry of Defense in the late 1970s to pursue a domestically produced copy of the AKM rifle to replace worn out rifles for Iraqi troops in the continuing war with Iran.

Capitalizing on the favorable relationship with Yugoslavia, Iraqi technicians secured cooperation with The Zastava Arms Factory in Kragujevac, near Belgrade. By 1980, Iraq purchased tooling and machinery to establish its own factory near Baghdad under license from Zastava with aid from Yugoslavian workers and technicians. The main factory opened east of Bi'r Musammad, Babil, Iraq. The result was the introduction of AK-type rifles of excellent quality in a country not previously known for superior domestically produced weapons. The Iraqi produced AKM copies of the Yugoslavian M70B1 and M70AB2 rifles became known as the 'Tabuk.'

Iraq is known to have fielded the first Tabuks by at least 1980, making them a veteran of the Iran - Iraq War, the Gulf War, and Operation Iraqi Freedom. The rifles are currently used by all segments of the new Iraqi Defense Forces and continue to be among the most serviceable and robust weapons among Saddam-era arsenals. Iraq is now replacing it with the imported Colt M-16 Rifle. 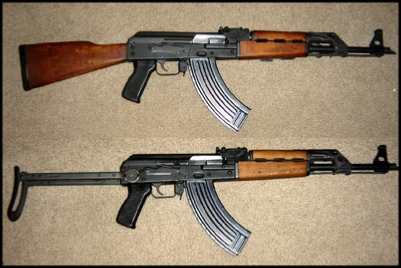 In 2004, Arsenal Co. began contracting with the U.S. Government to supply Kalashnikov rifles to equip the reconstituted New Iraqi Army. Arsenal Co. manufactures the 7.62 mm. AR–M1, which is a hybrid incorporating up-to-date AK74 design features, such as the muzzle brake and polymer furniture, with the more durable early milled receiver and front sight block.